MY NEIGHBORHOOD in my rural town has been abuzz for several weeks now with the frequent appearances of a mama black bear and her three adorable cubs. The bears have wandered far afield, according to the local constabulary. Their den, I have been told, is about two miles west of where I live, and mama bear has been spotted peering into the windows of the high school, a mile north and east from here. The presence of the bears has even made the local newspaper.

My immediate environs have proven especially popular with this single-parent ursine family. East of me, the bears were spotted in a maple tree late afternoon on Mother’s Day, and they were still there at six o’clock the following morning.

To the south, directly across the street from me, the bears ransacked a neighbor’s garage. The intermittent blast of an air horn to the west proclaimed the unwelcome presence of the bears earlier today, and mama has been seen sound asleep — not once but twice — on a nearby porch.

I have now had three close encounters of my own. The first came when I was on my way to pick fiddlehead ferns May 6. My dog Molly charged into the woods barking, only to reappear suddenly, still barking furiously but backing up — something she would never do if it had been a fox, woodchuck, or squirrel. Curious, I approached and saw mama bear up in a tree. After watching for a moment, I called Molly and continued on to pick fiddleheads, not 50 yards away. Molly was placated, and I had little concern that the bear would leave its perch during the brief time we were there.

Last Friday, May 8, my mother and I were talking in the kitchen. She said that she had heard a noise and looked out to see that the suet feeder was down. Probably a squirrel, we agreed. The suet cage sat atop a bird feeder next to the house, about eight feet from the ground, tethered to the wall by a thin rope. The acrobatic squirrels were relentless in their pursuit of this free, rich food.

I stepped outside to see what had happened, and there before me, not 10 feet away on the sidewalk, was mama bear, calmly eating the suet. I took several photos and she ignored me. But when she finished her meal she took a couple of steps in my direction — I was standing on a deck — before heading down the terrace. It was not exactly menacing; still, I quickly retreated into the house. The bear stopped to take a drink from the birdbath before she left for parts unknown. 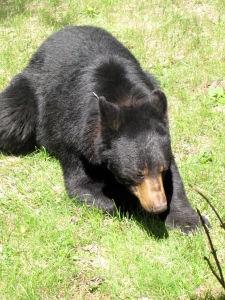 MAMA WAS BACK today, though, this time for the bird feeder. I had foolishly neglected to take it down under the misimpression that it was safe. This time, her three cubs accompanied her. But rather than partake in the gourmet feast, they scaled a maple tree not 20 feet away.

I took more pictures, and Molly went ballistic, indoors. The bear seemed only mildly irritated by the noise — not enough to abandon the bird seed, which she extracted casually from the metal feeder near the same spot she had devoured the suet.

She then left the yard, abandoning her cubs. Frightened by Molly’s frantic barking, the baby bears had retreated to the highest branches of the maple tree.

Perhaps mama was practicing tough love. Maybe after spending a night in a tree with her three young darlings, she decided it was time that they began to look out for themselves.

Whatever her reasons, at least one cub was in great distress at her disappearance. As I lay down for a nap after lunch I heard a strange, raspy wail. Looking out, I saw that the source of the noise was one of the cubs. Its mournful, one-note cry was repeated again and again, filled with longing and terror. The cub became so distraught that it finally braved crawling down the tree.

It dropped to the ground, and looked vainly for its mother. Not finding her in my yard, the cub headed west toward my neighbor’s.

After a few minutes, the cub resumed its mournful cry, and not long after that I heard the piercing note of the air horn. What was this poor, lost creature to do?

Happily, after several agonizing minutes, mama returned. She re-entered my yard with her baby trailing her, and sat beneath the maple tree where her other two cubs silently looked down at her. Mama seemed indifferent, unhurried, calmly finishing the dregs of the birdbath and scratching herself.

Finally she got up and began to walk toward my garage, seemingly ignoring her treed cubs. The two followed her every movement, torn between abandoning the safety of the tree and their desire to be reunited with their mom.

After a few minutes they made their decision, and swiftly scrambled down the tree trunk. They ran to momma and their sibling. Mama licked them, stood up briefly on her hind legs, and then they were on their way. 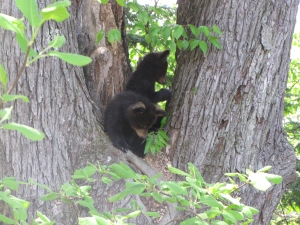 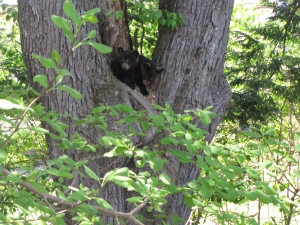