Skip to content
Home |Visual art|Return Of The Pods

EVER SINCE I first encountered them in mid-winter four years ago along the edges of a field near the Connecticut River, I have been fascinated by the plant that produces odd-shaped pods along its stem.

I still do not know the plant’s identity despite multiple Google searches (plants with pods, plants with seed pods, weeds with pods along stem, and so on). I do not know if the pods contain seeds or are a mutation of some sort, much less the plant’s name. But whatever they are, they are unique and riveting.

The pods appear on thick, sturdy stems, two to three feet above ground. They are roughly oval in shape (with great variation), and about an inch in diameter. The stems emerge from the the top of the pods and climb another foot or so in idiosyncratic angles before ending in mid-air.

Since I first observed the pods in January 2011, I have painted them several times, beginning that winter with a suite of paintings called Winter Weeds, which shows the pods at different times of day. The images are recognizable if not realistic, emphasizing the pods’ odd, voluminous shapes, and variations in color according to season and light.

Each year since I have returned to the theme, exploring the pods in different seasons and contexts: 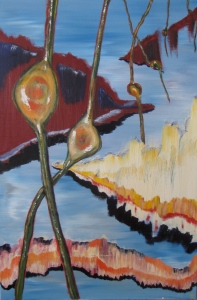 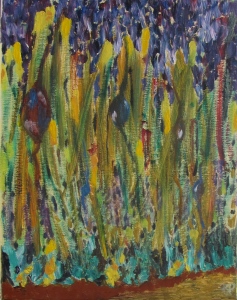 THIS SUMMER along the border of a different field I discovered some new pod plants, heavily camouflaged by their foliage and surrounding vegetation. The pods were already well formed but they blended in, in shades from maroon to green.

I had not been looking for them, and in fact I had walked past them dozens of times (it amazes me how much escapes my attention during my daily walks). The next day I returned with my camera and took a few photographs of the pods (one of which I recently shared with a local nursery in hopes of identification), and forgot about them.

But a few weeks ago I began working on a canvas with only broad shapes and colors in mind on the background’s soft vertical lines. Before I knew it, I was painting pods: “Summer Pods,” with all of the surrounding light and color of the season.

I wouldn’t exactly call the pods an obsession — it is not as if I contemplate them much between paintings (although come to think of it I have one hanging on my living room wall, and another on my FB page). But I don’t feel as if I have exhausted this theme yet.

JUST HOURS after this post, two of my friends came to the rescue. A friend of one wrote: “The ‘pods’ are found on many kinds of plants, as they are galls produced most often by insects, but also by bacteria, fungi, and other such things. There are probably thousands of different kinds of galls. Goldenrod tends to have lots of galls in that shape, so that would be my guess.”

To which another friend responded, “Viruses, too, cause galls. [The late scientist] Lynn Margolis said galls are OFTEN the start of a symbiosis!!!”